Start a Wiki
"Her Comedy ～First Kiss～" is the fifth episode of the Kämpfer anime.

The Seitetsu High cultural festival is about to begin with preparations underway. The girls are busy working hard, while the boys are dressing up as girls and trying to get on the girls side. In Natsuru and Akane's class the other students are surrounding them to support and help prepare them for the Miss Seitetsu Beauty Contest. Natsuru then asks about the class project but the Assistant Committee Chairperson says they already finished with that. The class then get Natsuru & Akane to try on various outfits and the Treasurer takes photos of them. After 8 outfits they both seem to not be able to take any more of this which luckily they were finished anyway and tells them to get changed in the changing room. But without them knowing the other students could see their shadows through the curtain as was being recorded. Kaede then bursts in hoping to see Natsuru in cosplay only to find shes already finished getting dressed. Kaede and Akane then bicker over Natsuru, as she just stands there unknowing what to do, and finally comes to an end when Kaede runs off upset. At the end of the day Natsuru is walking home, as a guy, when he runs into Kaede as they walk home, but not together. Natsuru takes this chance to try and mend his relationship with Kaede. Kaede tells him Akane was mean to her and suspects that she may also like Natsuru but Natsuru (clueless like always) just says they're friends but then accidentally encourages Kaede to go for the female Natsuru which cheers up Kaede but still regards male Natsuru as a rival. Shizuku then appears sat on the wall having heard the whole conversation between the two and thanks Natsuru for cheering Kaede up.

The next day and the festival has begun, and as Natsuru walks into the changing room Kaede is there in a wedding dress which makes Natsuru have a fantasy of what it would look like marrying Kaede. Akane then interrupts telling Kaede to go to the waiting area as she is dressed, Akane follows her into the waiting room as she is also dressed. Natsuru sits down in relief that the situation has passed when Shizuku appears sat next to her out of no where making Natsuru jump, she expresses her concern over the Kaede and Akane situation before suggest they should get dressed. Shizuku asks to see if Natsuru wants to see her change but he says no and walks into a separate room to change.

The contest then begins with Masumi Nishino playing host. Natsuru comes out first with a rapture of screams and applause. She is then told to do her appeal, she thinks about using her zauber as magic but unfortunately told to refrain from use of fire so she just stands on stage not knowing what to do as the crowd just stares in silence. At which point some Entrial plushies are thrown into the crowd as you see some people catch them. Kaede then walks onto the stage with the audience screaming for her too. She then recites "The Entrails Princess in Love" to confess her love for Natsuru in front of everyone. She throws her bouquet into the crowd and turns towards Natsuru to kiss her, the crowd go wild, but just before they kiss a gun goes off and Akane is standing there in Kämpfer from. After a few exchange of words Akane begins to shoot at Natsuru and Kaede but Natsuru grabs Kaede and dodges the bullets as they come out unharmed apart from Natsuru ripping a sleeve. Akane angry at Natsuru for helping Kaede then shoots at Natsuru's feet which causes her to loose balance and fall on top of Akane, the audience begin to chant "kiss her" towards Natsuru but Akane pushes Natsuru off her and as Natsuru lands on her bum her tops stitching comes undone and she grabs hold of it to keep herself covered up. The crowd goes berserk with a massive cheer and loads of pictures being taken. With Natsuru now preoccupied by holding onto her clothes Akane takes advantage and sticks her gun right to the back of Kaede's head, but as she goes to pull the trigger the gun is knocked out her hands. Shizuku then makes her entrance on stage, she throws her cape onto Natsuru helping to cover her up. Akane picks her gun up and shoots at Shizuku who throws her knife cutting the bullets in half. She then throws her knife at everyone grazing them enough to knock them out for the count and gets announced as the winner.

After the contest Natsuru wakes up as a boy with Shizuku sitting there waiting. They talk a bit about the contest with Natsuru thinking this was Shizuku's plan all along but she just says she had to step in before it got out of hand. Natsuru thanks her for doing so but that isn't enough for Shizuku as she then kisses Natsuru. Shizuku then leaves saying that's enough leaving Natsuru in a state of shock as she stole his first kiss. Mikoto is then seen walking out the front of the school upset she couldn't find male Natsuru anywhere and shakes the bouquet she caught in anger and a Entrails Animal drops out and appears to have spoke to her.

Assistant Committee Chairperson: Is she blindly in love? Natsuru-tan's popular.

Shizuku: I just thought it would be a good time to change.
Natsuru: I see. Later then.
Shizuku: Oh? Don't you want to watch me change?
Natsuru: Nope.
Shizuku: What a boring boy.
Natsuru: Fine with me.

Harakiri Tora: That's our useless Natsuru for you.
Seppuku Kuro Usagi: Akane always falls short, but that's okay!
Kanden Yamaneko: My my, Shizuku-sama. You should've just cut off their heads.

Natsuru: Don't tell me you dressed m--
Shizuku: Gee, I wonder.
Natsuru: I don't believe you. And you consider yourself a woman?
Shizuku: I'm pleased you would treat me as one.
Natsuru: I wasn't complementing you!

Natsuru's outfit for the beauty contest 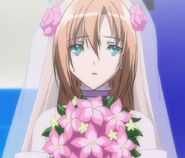 Kaede's outfit for the beauty contest

Akane's outfit for the beauty contest 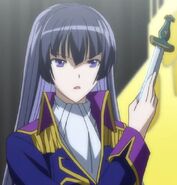 Shizuku's outfit for the beauty contest

Kaede leaning in to kiss Natsuru

Retrieved from "https://kampfer.fandom.com/wiki/%22Her_Comedy_%EF%BD%9EFirst_Kiss%EF%BD%9E%22?oldid=8582"
Community content is available under CC-BY-SA unless otherwise noted.